The late historical period may be distinguished from the early and middle periods by the fact that we may directly trace the origins of the traditional schools and systems of the classical period to this era. This development can be attributed to several factors: the growing influence of the printing press, the beginnings of a modern mentality that included national consciousness and a “scientific” mindset, the rise of the middle class, and the wearing of the sword as an everyday article of dress. These social changes had their effect on fencing as they did on other areas of human endeavor. Specifically, the printing press and the greater ease of long-distance travel helped the transmission of both first-person and vicarious knowledge, while the growth of the urban leisure class gave the fencing master a steady stream of willing patrons. 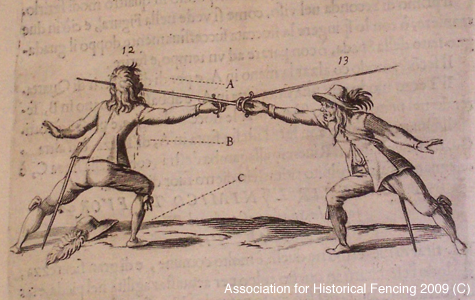 The late historical period is the era in which fencing evolved into distinct schools specifically intended for civilian use. This development resulted in schools and systems that remained intact for long periods of time. In short, this is the era in which a differentiation between military and civilian systems were clearly established, and national schools—such as the Spanish, Italian, and French—became clearly defined. Finally, the schools of fencing, which may be documented through the printed materials left to us, can be discerned, and the origin of traditions that have come down to this very day may be positively identified.

We know, for example, that rapier technique had its birth in the late 16th century, while the 17th century was the golden age of this weapon. The 17th century also saw the development of the smallsword where, under the leadership of French masters, the weapon developed into its own distinctive school. It was not until the 18th century that we see the full development of l’escrime français. The Italian school during the 18th century continued to adhere to the method of the striccia, or thrusting rapier.