Though we may trace the art of defense back to the 14th century, it is difficult to talk about fencing before that time since there is simply no surviving documentation, save for anecdotal evidence. The fencing book (fechtbuch) known as I-33, penned circa 1300, is the first known treatise on Western swordsmanship. However, specifics on styles, techniques, or methods that predate this are, due to the lack of documentation, open to speculation. Most importantly, there was no clear distinction between civilian and military use of the sword. The early treatises do, however, contain clear descriptions of timing, distance, binding, engagements, parries, feints, voiding actions, and footwork. The foundations of the systems within the “middle historical” period can be traced to this time period. 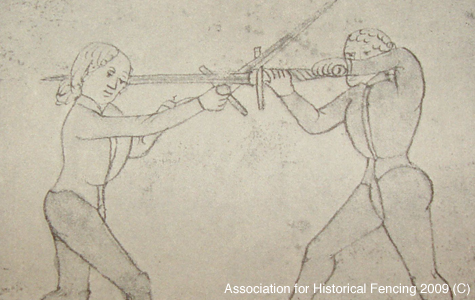 The I-33 fechtbuch is also the earliest known documented evidence of the use of the sword for personal self-defense or for monomachia (that is, dueling), though the distinction between civilian swordsmanship and military swordsmanship was just beginning to be recognized in this period. These two aims—self-defense and dueling—have guided the development of the art of fence through the centuries. The attitude and techniques that are necessary to these ends differ in many ways from those of military swordsmanship. This distinction is of no small importance.