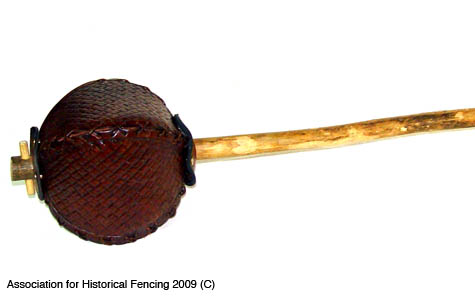 The singlestick was a practice weapon constructed with an ash stick and a leather or wicker basket to protect the hand. In the 18th century it was a practice weapon for the British backsword and in the 19th century it was also a practice weapon for the military sabre. Singlesticks were not necessarily designed to replicate these actual weapons, but rather, to facilitate the development of specific technical skills. Singlestick play became very popular in public assaults and prize fights. By the end of the 18th century sport versions became popular. Fencers stood still and exchanged blows until one was successful in drawing blood from a hit to the head.  Blows to the body above the waist were employed to draw the parry to create the opening to the head.