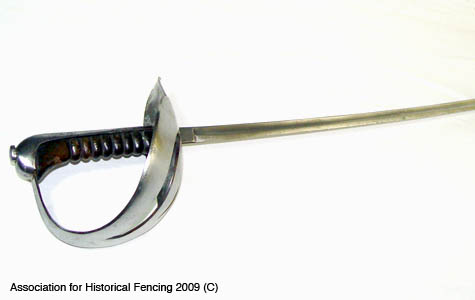 The dueling sabre was a cutting and thrusting weapon specifically intended for the purpose of civilian dueling and is only related to other sabres in its construction and general shape; its theory and purpose, which were developed in Italy during the second half of the 19th century, are not related to the military sabre. The slightly curved blade is wider at the end near the guard and gradually tapers toward the point. Along the sides of the blade are fullers (grooves), which extend from the end of the blade forward to approximately one third from the point. This last section of the blade becomes flat. The blade also has a true edge and a back edge that runs back one-third from the point along the spine and both are sharpened. The point could be sharpened or rounded. The sabre is constructed with a guard made with a knuckle bow that can be of a variety of shapes designed to cover and protect the hand from both cuts and thrusts. These sabres often had grips that were wrapped with sharkskin and wire and a back strap made of steel that was checkered which ran along the top of the grip. Although the dueling sabre is a weapon that is used for both cutting and thrusting, thrusts were often times prohibited in duels.  The training saber was a blunted version of the dueling weapon. It consisted of a blade that during its forging was often times folded over into a blunt point which was nearly square in shape. It had a slender grip made of wood that could be carved, checkered, wound with cord, leather and wire or cord, leather and wire as well as the sharkskin version previously mentioned.