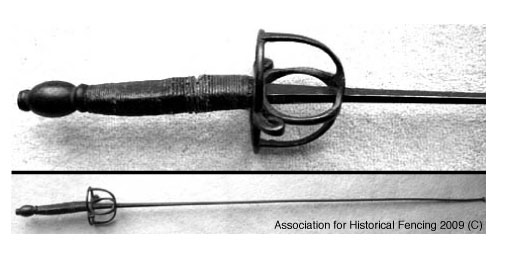 The older English term “foile”, derived from the old French word fouler or refouler, was a term applied to any rebated or unsharpened weapon which is constructed with dull edges and a blunted point in the shape of nail head. This point was usually covered in leather forming a button. From the end of the 16th century, the term floret/fleuret was used in France, the term fioretto was in use in Italy, and the term “foile” (which later evolved into the modern word “foil”) was used in England, all being synonymous. Both the French and Italian terms, meaning “flower bud” came about because the leather covered nail-headed point was imagined to resemble the botanical structure. The foil continually changed alongside the swords it was designed to emulate (rapier, small-sword, dueling sword). There has been considerable variation in the design and construction of foils since the end of the 16th century. In most types the blade is quadrangular in cross-section and specifically designed to provide a certain degree of safety in training and practice. These training weapons were not necessarily designed to replicate the actual weapons, but rather, as an implement to facilitate the development of specific technical skills.