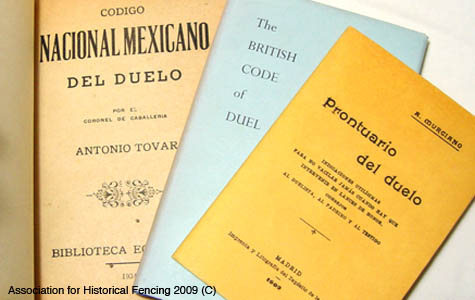 Personal combat within the duel is highly regulated and ritualized. To this end, specific rules and regulations that pertain to the duel have been published in varied forms throughout the centuries. Upon reading them, they seem more like volumes on jurisprudence than on the deadly business of armed combat. However, the procedures described within the dueling codes were strictly adhered to by those who engaged in this type of conflict, as duels were closely tied to social class and social standing. These texts existed in many languages and in various forms throughout Europe and the Americas. The intent and the spirit of these regulatory systems were uniform. Namely, to ensure that if two individuals of equal social standing had to engage in combat to resolve differences, they would do so in a civilized and fair manner wherein each had equal opportunity of victory or defeat. The ethos and concept of the duel was referred to as the code duello.

Back to The Duel