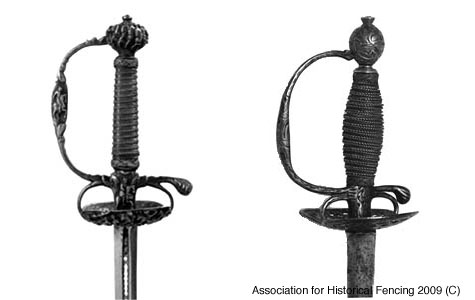 The small-sword as well as its method of use was developed by the French masters in the mid-1600s. As compared to its predecessor the rapier, the blade of this civilian sword was much shorter in length and lighter in weight. The earliest forms of this weapon were mounted with diamond cross-section rapier type blades. At the height of its popularity in the 18th century the typical small-sword blade had a hollow-ground triangular cross-section and the weapon was used purely for thrusting, as is documented in the 18th century small-sword treatises. Although other blade types were also in use the triangular blade is the one that is most closely associated with this weapon. The hilt consisted of a shell guard, arms of the hilt, quillon block with quillon and knuckle-bow attached, grip and pommel. The small size of the hilt, its parts, and configuration were designed to balance the lighter blades and enhance maneuverability. The training tool for this weapon was the foil (fleuret). Its blade was always rectangular with a point terminating in a nail-head shape, but the guard varied in form, ranging from a series of bars resembling a crown, to a hollow figure-eight shape, and others.