The Grand Assault of Arms is the ultimate test of martial skill among classical fencers. The grand assault proper developed in the late 1860’s and early 1870’s in tune with the economic and historical forces that gave birth to France’s gilded age, La Belle Epoque. According to Robert Milton, the sports column writer for the French newspaper Le Figaro, this was “a time when everything is made grand – Grand Review or Grand Minister. It is thus that we announce the Grand Assault”. 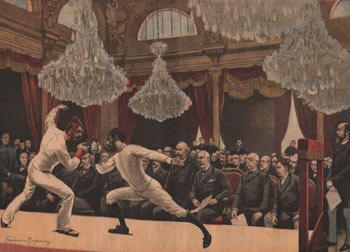 An assault of arms observed by the President of the Republic. Illustration from Le Petit Journal, June 1895.

Each year classical fencers from various localities both national and international travel to New York City to participate as individual practitioners of classical fencing from traditional fencing schools, university clubs, and study groups. Over a span of two days the fencers contend with one another in a grueling test of fencing skill with many participants fencing more than one weapon.

Preliminary assaults are held on the first day to determine the finalists in each weapon, and on the second day the finalists meet to determine the winners in each weapon category. These finals occur within an elaborately organized event that is open to the public. Professional fencing masters and instructors also participate with exhibitions of skill presenting demonstrations of various schools and weapons both classical and historical.